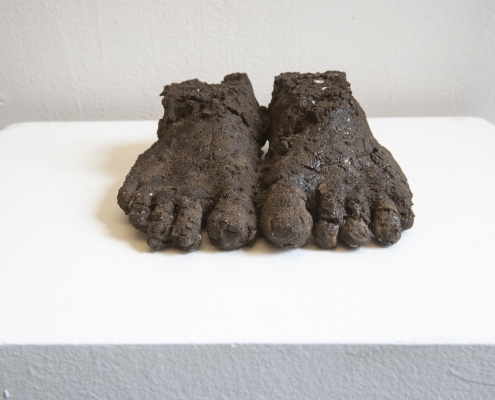 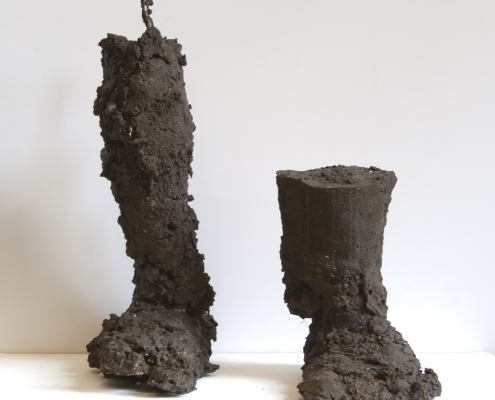 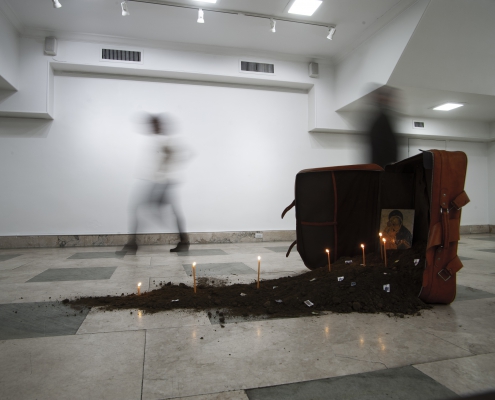 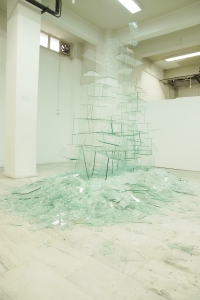 Since I can remember myself I was observing the people, the world and the shapes around me. I was studying the behavior of people individually but also as a whole. Glass has similar qualities with the psychological health of a person who is suffering. Fragile , vulnerable, sharp, dangerous, airy it relates to the fragmentation of the own self, with the person who doesn’t let others come close , with the summary of people ( society) , who doesn’t let anything “foreign or strange” invade it. The “ self “ in its weakest and sharpest form which resembles the reflection of a glass fragmentation wall, ready to collapse as soon as one small piece is being distracted.

In my work I tried to show the borderline of collapsing/ destruction. For construction I used pieces of glass, which I found thrown away in storage rooms or factories, brought them to my place, cleaned them and started gluing in order to give the impression falling into pieces. ( destruction). I was often working with bare hands to have direct contact with the material and its temperature. until the very last moment all the odds were against me: time, aesthetics and the resistance of the construction itself. Mainly the fact that I had taken something from the garbage to present it to the eyes of the viewer ( visitor), and If it was permitted to call it “art”, was weird.

Finally every movement had to be studied carefully first. Glass cuts. And it cuts badly. And it leaves a mark.

One Day of September

The exhibition was about, to create using recycled wine barrels and give them a new glance through art. I took my barrel from my hometown Drama, which is considered as the “small Bordeaux ” because of the similar microclimate. The characteristics of this small city are that through WW1 and WW2 thousands of people were killed in the fields that now grow grapes producing extraordinary wine.

Respecting what was inside, as something spiritual I didn’t want to use the barrel as a surface for painting but reveal its history. I split it in half. In one half a fill it with soil, a real vine plant, bullets, shrapnel of a grenade and bones. I made an incision in the field and to the History. My question was what could the roots of the grape find inside the earth. A most common and used term in the wine world is “Terroir” which is how a particular region’s climate, soils, and aspect (terrain) affect the taste of wine. Some regions are said to have more ‘terroir’ than others.

The other half I filled with red wine. An indication of the religious aspect, where the wine is the blood of Christ, and moreover even thousands of years earlier in Ancient Greece the large festival in honor of the god Dionysus, the Dionysia. Celebrating the cultivation of vines, transfigure the substance to the holy spirit. Though methexis to coming closer to the divine.

In 29 of September 1941, in the small village, Doxato 187 innocent people were executed for retaliation of last night riot from the occupation forces. Back in the barrel, I wrote all the names who were killed. In fact, I cauterized them into the wood, to make it a scar. Unforgotten.